We had planned one day during the holidays to fish on a specific piece of water with the fireball. The advantage of fireball fishing is that you can fish the spots that you have in mind, verry effective with your electric engine. You can move very quietly over your spots, and in this way you pass every obstacle where a big predator can lie in a ambush. And then, when you show them a juicy baitfish…..they can,t resist it.

The picture below shows the fireball system as we use it. 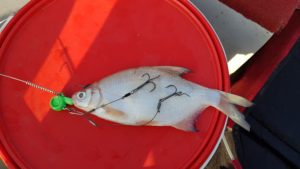 The fireball,s have a weight between 25 and 40 grams, when the baitfish is a bit bigger than we use the heavier fireballs, and whit some smaller bait fish we use the lighter ones.
There are treble hooks on the stingers, and one of the hooks is bent out. We put these in the baitfish, 1 treble in the back of the fish and 1 treble in the belly of the fish. Now when you set the hook, the hook is easily removed from the baitfish.
This considerably increases the chances that you hook the pike or zander. Also if you would hang a perch on the fireball, this works very well, a perch has a rather tough skin and if you use a treble without a bent hook, you have a chance that, when you set the hook you pull the hook further in the perch.

Okay, time to go on the water.

We move out of the harbor and a bit further we stop the boat for a moment. Here we will prepare the rods and we can start fishing.
When I have prepared the first rod and the fireball is hanging in the water, I want to prepare my second rod. I don,t get the chance to do so because the first fish on the fireball has already been taken by a pike. I wait 5 seconds so the pike can take the bait fish in his mouth, especially not longer waiting because we fish with 2 stingers, a pike of decent size has the whole bait fish easily in one hit in his mouth. And a pike that swallows the fireball is the last thing we want.

I set the hook and a nice strong pike tries to get rid of the hook. When it,s next to the boat i grab him in his jaw and then we can take a picture. 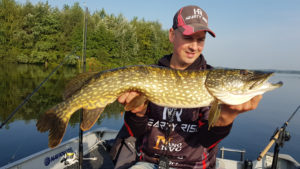 That went pretty smoothly, less than five minutes and the first fish is already in the boat. After putting back the fish, the other rods are prepared and we start moving over the water. The other fishing rod we use is provided with a floater and a fireball underneath. This is also a very nice system that we have forgotten to take pictures of, but we will explain that in one of the following reports.

The advantage of a fireball under a floater is that you do not have to use extra lead under your floater, and your baitfish always hangs straight. Although a baitfish that occasionally turns around during fishing like its wounded, can also be very effective.
When we go further it takes a while before another bite comes. The fish seems to be harder to catch than we thought in the morning. The weather has also changed a bit. The day started very sunny but later it went cloudy and we even got a little bit of rain. Generally not the most ideal conditions.

Until I feel that my baitfish is carefully lifted up, I give a bit line so the pike would not feel any resistance and wait a moment to set the hook. After the hit, the pike on the other side of the line again strongly reacted and it tries to escape with all its power. Fortunately, this one is also well hooked and I can take him out of the water. 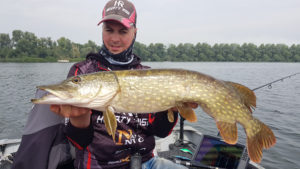 Just take a few pictures, and he’ll be put back again. Always a good moment when the pike swims back into the deep.
After this pike I get three more bites, two of them stay on the hook. These were mainly smaller pike, so they were tapped next to the boat so they could quickly get back into the depths.
Then for a long time it will remain uncomfortably quiet and we have already fished several spots. Sometimes you have those days that they really do not want to eat and you have to work hard to seduce them.

We decide to go back to the spot where i already had several bites. René did not had a bite all that time and started to get a bit grumpy. Yet we both fished the same way so that could not be the problem. When at some point we went over a spot where I lost a big fish a few weeks ago.

Than i got another bite on the rod in my hand. I felt a big hit and René saw it happen, he looks at me and says: how, what am I doing wrong, I say I do not know but this one is for you. He picks up the rod and taps the reel, tightens the line and gives it a big hit. So, that one is hooked, the rod is bending over and a good fish sharpens René right away. This looks like a very good fish I say to him, yes you have that right. The fish takes several times much line of the reel and bends the rod straight into the handle, goes a few times under the boat and when she comes up she also jumps a few times in the air.

Of course, the pike shakes her head with her mouth open as she jumps out of the water, and we both see the fireball going back and forth. Ooowww lets hope that one is not getting loose …. Then she comes closer to the boat and I can get the net underneath, Owyeahhhh that one is in, whe put her on the savety mat and we see that she is perfectly hooked, the trebles are sitting perfect in the side of the mouth. The system with the trebles bend out, works perfect. On the measuring mat she gets over the 116 cm. What a great fish and what a power she had. Great to see the fight with such a big and strong fish. 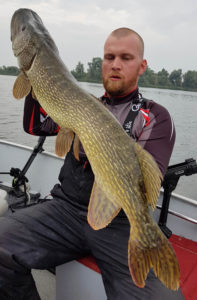 We hug each other and René says, thanks mate. I needed this. You fish together and so you also give each other a fish when its a hard day of fishing. Fishing together, enjoying together. After the measuring and the photo, s she go,s back in her element. Catch and release. 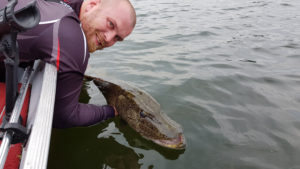 After these great moments we make one last drift about a nice sharp drop of. But we both had something like, this was the moment of the day we were doing it for, so if this drift does not diliver anything, we’ll put an end to it. Halfway through, René got another bite on the fireball under the floater. This time he gives me the fishing rod and i hook a nice pike around 80 cm. Since it was hooked a bit tricky, we put it back immediately after unhooking.

After this we decide to stop and call it a day. We get back and enjoy the beautiful and instructive moments of this day.

Tight lines and up to the next sesion.

The rods we use for fireball fishing:

Predator II PR-892XH 30-100 gram with a lenght of 2.66 meter. This rod is good for the lighter fireballs and smaller bait fish.

For fishing with floats and fireballs we use deadbait rods with a length of 3 meters and a weight of 3 lbs.