We have been in the holiday season for a few weeks now and René and I had agreed to spend a few days together on the water. First I went to Zeeland with the family for a week to relax. When we return, we would try to catch the big ones for a few days.

The first day we could start a little bit later and we would fish with lures all day long. Just go out on the water and do some trolling to see where the most fish are in the water. After we had fished the intended spots, caught a few small pike,s and located where the (bait) fish is, we went back to the first spot.

The pike we caught was mainly caught on brightly colored baits, which were clearly preferred instead of natural colors.

Okay, back to the first spot. Once there I put on a Salmo hornet 9 in a blue yellow bright color. When we fish past a nice drop of from two to four meters and see a school of bait fish passing by on the lowrance, its my rod that doubles shortly afterwards. I grab the rod from the rodholder and feel that it,s a good fish. She stays deep and takes a couple of meters line. When she comes to the surface we see a big head and as soon as she is exhausted René can put the net underneath. Fortunately, that goes right because the moment she slid into the net the only hook she was stuck with shoots out of here mouth. Quickly lift into the boat and briefly on the measuring board. With 109 cm a lovely pike. Quickly take a few pictures, and than she go,s back in the water again. 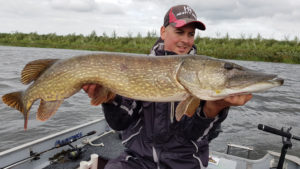 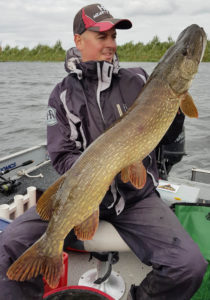 On this spot it stays with this one fish and we decide to move on.

When we are fishing on the next spot, I started with a Nilsmaster with some nice bright colors. We move away from a drop of and when the Nilsmaster shoots over it a good pike grabs the lure, but unfortunately the fish is to smart and gets away. That also is a part of fishing sometimes.

A bit further away the bait is taken again and a pike with beautyfull marks comes out of the water. This pike has the characteristic blue colors in the mouth and the color can also be found on the fins. It is said that this is because the pike lives in an environment where many algae are with similar colors.

When we turn around and go over the same course again, René gets a hit on the 25 cm Roach from Savage Gear in the color yellow green.

To our surprise, it is the same pike as i just caught on the Nilsmaster. Apparently this one was very hungry or can not resist the bright colors that we fish with. Once again on the photo, now with a few close ups of the blue colors.

After this pike , it remains quiet and runs towards the end of the day. We decide to put it to an end and evaluate the day.

It was mainly the bright colors that did well today. In the morning we caught the first fish on slim baits with a bright color. The biggest of the day went for a small bait with bright colors. And in the afternoon we picked up the last fish again on bright colors and slim baits. Except for the fish that we managed to catch twice.

Tight Lines and on to the next one.