Big bait, big fish. Not always the way it goes, but last week it turned out to be the way for the big pikes. Robert had asked me to go out on the water for a day fishing. Of course, i,m going, because so far I have only fished for pike three times this season. I had managed to catch a few nice fish, but not yet a true giant.

The plan was made for a day fishing with big lures and hoping for “the one“. The water temperature had also dropped quite a bit (4 degrees less than the week before), so the theory was that they would be feeding well.

We both started with an old-fashioned „Bull Dawg“ on the rod in the hand and we both had a 30 cm swimbait on the rod in the rodholder. We made the choice for a piece of water based on the wind direction. The wind was south/west and was blowing in the length of the water. That was for us the way we could steer the boat well and make some nice drifts on the wind.

After less than five minutes i already got the first big hit on the rod in my hand. The big Bulldawg was grabbed brutally and the first fish of the day was a fact. A very beautiful and healthy meter+ fish came to the surface a bit later. This one was already quit thick and by the two lumps in the belly you can see it had already taken several bream. The theory of them be feeding well was therefore quite correct.

A bit further i got another hit on the same Bulldawg, this time a handsome fish around 90 cm with another beautiful drawing on his body. The old trusted Bulldawg is clearly favorite today. After that i managed to catch a nice pike on the big swimbait that was on the rod in the rodholder. A bit smaller one this time, but this one also preferred a bigger bait today.

Then it stays silent for a while and we decide to look for shallow water and do some casting with big spinnerbaits. Along the way we came across several beautiful beds with fountainherb and these just smell like fish. So frontroller out and make a long drift. We both hang a big spinnerbait on and start casting over the weeds.

We mainly throw towards the edges of the beds, this is also the edge of the fairway. In this way we both catch some nice pikes. The little ones we unhooked next to the boat and from the larger ones we take some nice pictures.

In the meantime, a threatening weather is coming up. A heavy thunderstorm is hiding in the clouds. Fortunately, nature is good to us and we see the storm pass by. On the other hand, the sun has broken through and this gives very beautiful images and we make time for a photo. In the distance we see really heavy rainshowers falling down and a few big flashes come out of the clouds. How lucky can you be.

Then the wind start to blow a bit harder and we drifted with almost 2 km/h over the water. Time to test the new Patriot driftbag. This was attached to one of the hooks on the boat and thrown overboard. Immediately the bag picked up good water and as a result the boat slowed down considerably until we went about 1 to 1.2 km/h. Occasionally some adjustments with the frontroller and in that way we could fish much better.

When the bites started to stay out, it was time again to put on the large pieces of rubber and start troling again. I put on a big inline pike. Let’s see if I can catch a pike who leeds to cannibalism. This turned out to be the case and when the rubber Pike is grabbed by a real pike, it turns around in the plants. I fish with quit a thick line and by putting a little extra power i managed to cut the plants and pull the pike out of it. The fish takes a run a few times and then i can take it (full of plants) out of the water. Another handsome meter+ fish is the result.

Then the wind starts to rise again and some big waves are hitting the boat. The well-known big white heads on top of the waves are taking over the big water and we decide to look for shelter. This is nice to do for fishing, but it wasn’t very successful for the catch results. The bites are completely gone and we don’t see any fish on the sonar. It seems that the fish is more on the areas of water where the wind is blowing over. This will attract more food and therefore more baitfish, and where baitfish is, there is pike.

In the meantime the day is coming to an end and we decide to use a last weapon. The famous Shadclone had to do the trick. This bait has proven itself several times in the past as a seducer for the bigger fish. After all, we went for that one big fish and we did not see here yet. We put on a Shadclone on all rods. You must fish this bait at a minimum speed of 4.5 km/h or you will not get any action in the bait. We have been fishing almost all day at a speed around 3.5 to 3.8 km/h. Now we put on a bit more gas and we kept the speed around 5.5 km/h.

This immediately paid off, because after a small 50 meters we both get a hit on the clones. Robert takes his rod from the rodholder and has a nice pike around 80 cm. The fish on my line, just like the previous one, had swum into the waterplants and i had to get it out first. When this worked out, it turned out to be a good size of fish. Robert doesn’t hesitate for a moment and he unhooks his fish as fast as he can next to the boat, grabs the landing net and is getting ready to grab the fish. When the fish is ready for landing, Robert is putting the net under the fish and we can take some time to unhook her. That was a fine piece of teamwork. We put her on the measuring board, 121 cm …. Yes, this is the fish we went for today, “the one“. These are the fish that we do it for. Quickly take a few pictures and make a release video. One of the best moments of catching a big fish.

After putting her back, we decide to fish on another piece of water. After a double hit on the same pieces of lures you get a lot of confidence in what you are doing. Certainly if a big fish like that is coming out. The Shadclone has proven its catching power again. It finaly stays with these last two fishes and we call it a day. Tired but satisfied we drove back to the boatramp and put the Fury back on the trailer. The first 120+ fish in my new boat is a fact.

The rod that I use for fishing with heavy lures and big baits is the; Hearty-Rise Predator II BC PR-8001XH with a length of 2.44 meters. Casting weight 100 to 250 grams. 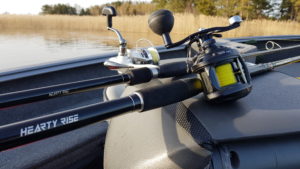 For troling you can use quite heavy baits. For excample the Bulldawgs that we fish, have a weight around 450 grams. The rod is tight enough to be able to set the hook but still nice and light and flexible enough to have fun while you’re drilling a smaller fish. Casting all day long or holding it in the hand while trolling is a pleasant activity. 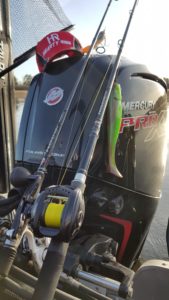 I provided this fishing rod with the Abu Garcia Revo Toro Beast 61 HS LH. With a Spider Wire line of 0.30 mm. For me, this is really a great combination for casting with big spinnerbaits, swimbaits, large shads and big hardbaits. And very suitable for troling with heavier lures.

Tight lines and see you next round.